Tokai University Solar Car Team which used HIT 1 solar cells boasting the world’s highest level of energy conversion rate, as well as high-capacity lithium-ion batteries provided by Panasonic as part of its sponsorship agreement with the team, won the 2011 World Solar Challenge (WSC), one of the world’s largest solar car race which was held from October 16, 2011 in Australia. The Tokai Team Crossed the Finish Line as #1 at Angle Vale, Near Adelaide The WSC is a solar car race competition that starts from Darwin in the north of Australia down to Adelaide in the south, traveling a total distance of 3,021 km. The solar car ran smoothly without any trouble to finally reach the finish line at Adelaide on October 20, 2011. Team Tokai from Japan took 32 hours and 45 minutes to drive their car, Tokai Challenger2, 3021 kilometres on solar power averaging a speed of 91.54 kilometres per hour. 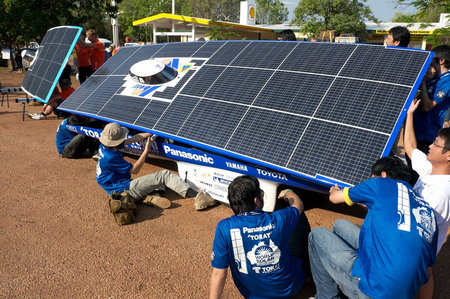 Panasonic HIT solar cells are hybrids of single crystalline silicon surrounded by ultra-thin amorphous silicon layers. With high conversion efficiency, excellent temperature performance, and high energy output per unit area, the cells are ideal for obtaining maximum power within a limited space, greatly lifting the performance of the solar car in the WSC where regulations limit the total area of solar cells that can be installed on the body. 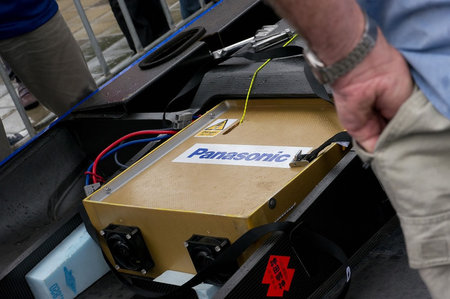 Panasonic also provided cylindrical 18650-type high-capacity lithium-ion rechargeable batteries. These high-capacity, long-enduring, and lightweight batteries utilize Panasonic’s proprietary nickel-based positive electrodes and have the highest level of energy density in the industry. They can operate for long periods of time and can be linked in lightweight battery pack arrays.