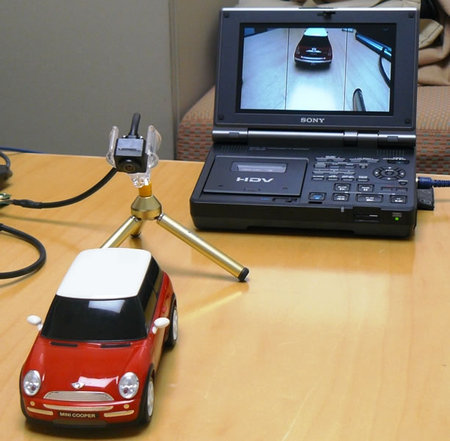 Sony Corp developed a CMOS camera to be used for Nissan Motor’s “around view monitor,” which displays an overhead view of a vehicle with four cameras. The Sony CMOS camera with 1.3 million pixels, 30 frame rate per second has 186.2° in a horizontal direction and 147° in a vertical direction view angle. So far, a small number of CMOS cameras have been adopted for vehicles because their performance, such as noise under low-light intensity, is worse than that of CCD cameras. Though Sony did not reveal the performance of this CMOS camera, the company said, “of course, it reached the required level for vehicles.”

The image processing DSP, which corrects distortion of images and changes viewpoints, is embedded in the camera module. The Sony CMOS camera measures 23.4 × 23.4 × 21.7mm.