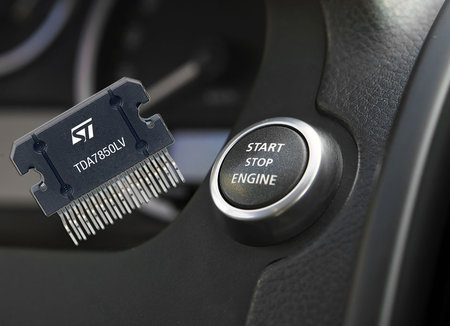 As car makers introduce features such as engine start/stop to reduce fuel consumption and carbon emissions, STMicroelectronics, is pioneering a new generation of chips that allow in-car entertainment equipment to operate without interruption as the engine is turned off and restarted. The first of these is the TDA7850LV, a 4x50W audio power amplifier that is the very first start/stop-compatible IC of its kind in production. Some manufacturers estimate that start/stop and other technologies such as high-efficiency engine management programs could be a big contributor to reducing energy usage, cutting fuel consumption by as much as 20% in certain models over the coming years.

The system shuts down the engine when the vehicle is stopped, for example at traffic lights, and restarts as the driver prepares to move off. According to market analyst Strategy Analytics, annual demand for vehicles featuring start/stop is expected to reach almost 20 million units by 2015, initially led by customer demand in Europe.