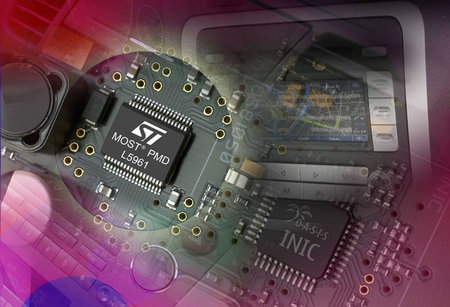 STMicroelectronics today announced the launch of the industry’s first integrated power-management solution for MOST (Media Oriented Systems Transport) networks. Optimized for in car multimedia and infotainment applications, the MOST network was originally developed for the automotive industry, but also has a wide range of applications in many other industries. The new ST’s L5961 power management IC, which has been designed in cooperation with fabless semiconductor manufacturer SMSC to work with that company’s MOST network processors, includes both the power supply and MOST-compliant power-management control logic, together with enhanced diagnostic and full system monitoring (power supply, network status, wake-up events, temperature). MOST technology primarily allows for a range of multimedia devices, such as CD or DVD players, car radios, and personal navigation devices, to be added into the car environment with minimal effort.

A chipset combining the ST’s L5961 power-management IC and and SMSC network processor can serve as a building block in any MOST network node, and provides significantly more independence from the individual applications that are connected to the network, in terms of turn-on/off timing and device failure, for example. Full qualification of the L5961, ready for volume production, is planned for Q3 2008. The L5961 is priced at $3 in quantities of 1000.