Suzuki has introduced a total of five models including new overseas models and a concept model at the INTERMOT International Motorcycle, Scooter and Bicycle Fair held in Cologne, Germany from 2 to 7 October, 2012.
Burgman 650/Executive:-Suzuki has introduced the Burgman 650/Executive, a full-model change of the Burgman 650, which has been appreciated for its comfortable ride and luxury features throughout the world since its launch in 2002. By adding slanted lines to the front cowling and slimming down the rear cowling, it has adopted a design which has a shaped-up impression. Also, by reviewing the details of the engine, it has improved its fuel efficiency by 15%*2 compared to the previous model. On its equipments, it has adopted an easy-to-read instrument with Eco Drive Indicator, ABS, and electric mirrors and screen as its standard equipments. In addition, the Executive grade has a backrest for the support of a passenger, a grip heater, and a seat heater as its standard equipments.

C1500T:-Suzuki has introduced the new Intruder C1500T, its first full-model change since its launch in 1998. The 1462cm3 engine equipped on the Intruder C1500T brings out the most powerful output and torque*3 in the 1000 to 1600cm3 cruiser class. By equipping the factory built side cases as its standard equipment, and by adopting a large-sized windscreen and seats designed to suit long-distance travels, it will offer a comfortable touring package. C1500T is designed to make a timeless, traditional cruiser styling. 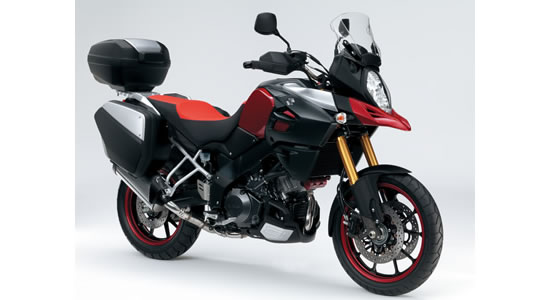 Concept model V-Strom 1000 Concept:- The V-Strom 1000 Concept is a reference exhibit model based on the spirit shared with the Sport Enduro Tourer, the V-Strom 650 ABS which is favored especially in Europe and North America. It is equipped with a newly designed 1000cm3 V-twin engine, aluminum chassis, radial mount front brake caliper, ABS, traction control, and specially designed side and top cases. The styling design of the V-Strom 1000 Concept is inspired by the 1988 DR750S, Suzuki’s first big on/off-road machine. With plan to launch it as a 2014 model, it will offer some of the best parts of the adventure bike such as the versatility, the fun of riding, and comfortable long distance travel.

Suzuki’s flagship Hayabusa, now equipped with ABS:- Under its concept, the Ultimate Sports, Hayabusa has long been a successor of its distinctive, high aerodynamic design and driving performance. And now, it has been equipped with ABS, and adopted Brembo monoblock front brake caliper to strengthen the brake performance for the additional improvement of its total performance.

GSX-R1000 GSX-R 1 Million Commemorative Edition:- Suzuki’s supersport bike, the GSX-R series (GSX-R600/750/1000/1100) has achieved its one millionth accumulated productions in 27 years, starting from 1985, the year GSX-R750 was launched, to September 2012. Commemorating this milestone, Suzuki has introduced a special equipment model of the GSX-R100, the GSX-R 1 Million Commemorative Edition. In addition to the special graphics and equipments, serial plate with the logo, 1 Million, will be equipped. Taken after 1985, the launch year of the GSX-R750, this special equipment model will be 1,985 units limited production model.