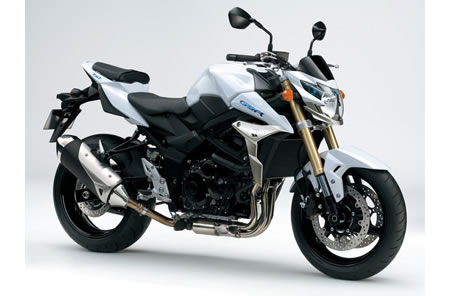 Suzuki GSR750: a new naked machine with futuristic styling and a powerful engine

The Suzuki GSR750 is a new kind of naked machine: one that combines edgy, futuristic styling with great performance on urban streets. It’s outstandingly rider-friendly thanks to atomizing injectors and other cutting-edge technologies that make it at least 10%* more fuel-efficient than the 2010 GSR600 and realize smooth, strong torque delivery in the low-to-mid rpm range. Plus, it has inverted front forks, a multi-function instrument cluster, a uniquely shaped headlight, and a triangle-shaped muffler that combine radical looks with great functionality.

Suzuki has unveiled the new overseas motorcycle model GSR750 for 2011 at the Intermot motorcycle, scooter, and bicycle fair, which is being held in Cologne, Germany, from 5 to 10 October. The new model offers improved performance together with an improvement of at least 10% in fuel economy.