Thailand floods forces Honda to cut U.S. and Canada production by half

Parts shortages from the three months of catastrophic flooding in Thailand have forced Honda to cut U.S. and Canadian factory production by 50% for the second time this year. The cuts, which come just as Honda was recovering from the March 11 earthquake and tsunami in Japan, will run from Wednesday at least through Nov. 10 as Honda tries to find alternate sources for microprocessors that are made in Thailand. The flooding, which began in July and has forced many auto parts plants to close. 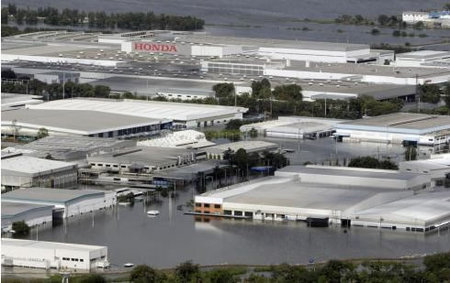 Honda’s announcement comes the same day the Japanese automaker announced that its quarterly profit tumbled 56%, battered by the strong yen and production disruptions from the March tsunami disaster. The December sale date for the 2012 version of the popular Honda CR-V crossover vehicle could be delayed by several weeks.