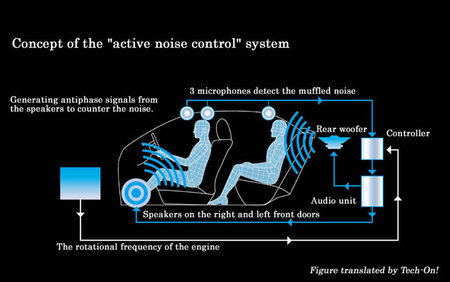 The rotational frequency of Crown Hybrid’s engine is as low as 1,000 to 3,000rpm when the vehicle is running at 20 to 40km/h (12 to 25 mph). However, if no measure is taken, the muffled noise of about 50-150Hz is transmitted to the car interior, impairing the comfort of the car. The first active noise control system of Toyota detects the muffled noise inside the car with three microphones and generates antiphase signals from the speakers to counter the noise, enhancing the quietness by about 5 to 8dB, the company said. The active noise control system is always in operation when the car is running. Neither a driver nor a passenger can manually switch on or off the system.

The Crown Hybrid is equipped with three noise canceling speakers: two on the right and left front doors and one rear woofer. The active noise control system works even when music is being played by the in-car audio system.
Source