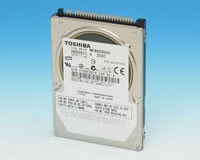 Toshiba announced the latest additions of 2.5-inch hard disk drives for automotive applications: an 80GB drive offering the industry’s largest capacity, and a 40GB drive. The drives will be used in such applications as car navigation systems, and will be released in industrial and retail versions. Toshiba’s automotive HDD have earned an unrivaled reputation for environmental toughness and performance, and made the company the leader in the world automotive HDD market. With its latest drives, the company has further enhanced durability and increased data capacity, using perpendicular magnetic recording (PMR) to boost areal recording density and to raise storage capacity to 80GB (MK8050GAC and MK8050GACE), double that of Toshiba’s current automotive drives.

The new Toshiba drives can operate at up to 5,500m above sea level, 1,200m higher than current automotive models. In addition to map data information for car navigation, the new Toshiba automotive HDD can be used in on-board entertainment systems, to store high capacity movie, digital image and music files. Sample shipping of the drives has started and mass production will start in March 2008.