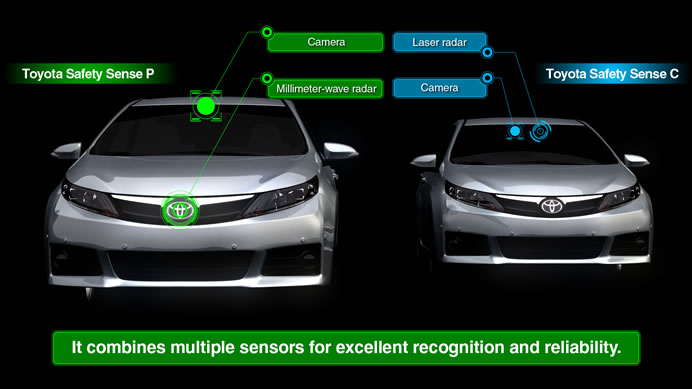 Toyota will offer a newly-developed set of active safety technologies designed to help prevent or mitigate collisions across a wide range of vehicle speeds from 2015. These technologies will be offered in the form of two “Toyota Safety Sense” packages, to be launched in 2015 and rolled out across most passenger models and grades in Japan, North America and Europe by the end of 2017. Two packages will be available depending on vehicle type―a C package for compact cars and a P package for mid-sized and high-end cars. 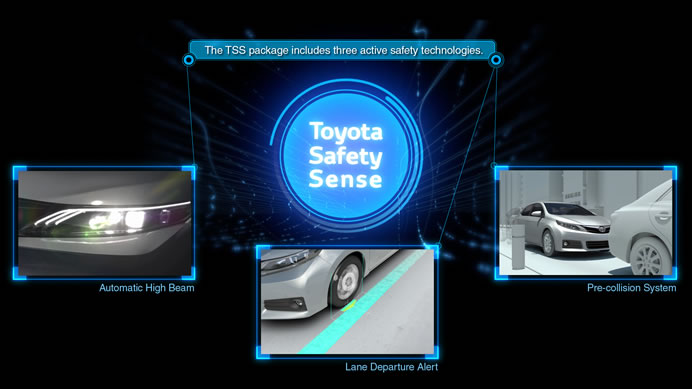 Toyota Safety Sense P combines a camera and millimeter-wave radar for outstanding performance and reliability. In addition to the three active safety technologies included in the Toyota Safety Sense C package, the Pre-collision System offered with this package also includes a pedestrian detection function. In addition, Toyota Safety Sense P offers Radar Cruise Control functionality. On highways, Radar Cruise Control uses millimeter-wave radar to detect preceding vehicles and determine their speed. It then adjusts vehicle speed (within a set range) to ensure that there is a safe distance between vehicles. By using a forward-facing camera and millimeter-wave radar to monitor vehicles merging into or out of the lane, Radar Cruise Control helps maintain smooth acceleration and deceleration while driving.