Toyota announced that the Toyota Automobile Museum, a cultural facility run by Toyota in Aichi Prefecture, Japan will host a classic car festival at Meijijingu Gaien Park in Shinjuku, Tokyo on November 30. The annual festival aims to promote and develop automobile culture and encourage interaction among car fans. 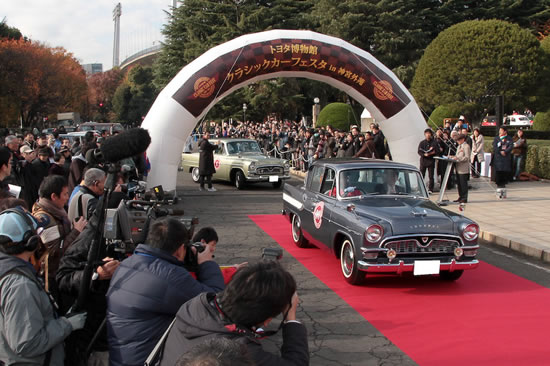 Most of the festival events will take place in front of the Meiji Memorial Picture Gallery. Planned events include exhibitions and driving demonstrations of classic cars from the Toyota Automobile Museum Collection. Shortly after the festival begins, there will be a crosstown parade featuring approximately 100 privately owned classic cars from around the world.

There will also be a special retrospective exhibition entitled “Motor Shows and Cars of the 1960s” that will offer insight into the globalization of the automotive industry over the years. Nine vehicles, some of which were displayed at motor shows, will be shown and driven. For the first time, this event will involve collaboration with other makers: three speakers, representing three different makers, will give talks about their favorite vehicles from among the nine models on display at the exhibition.

Additionally, this year’s version of the popular commemorative photo area will allow visitors to have their picture taken sitting in a BMW Isetta or Ford Thunderbird.