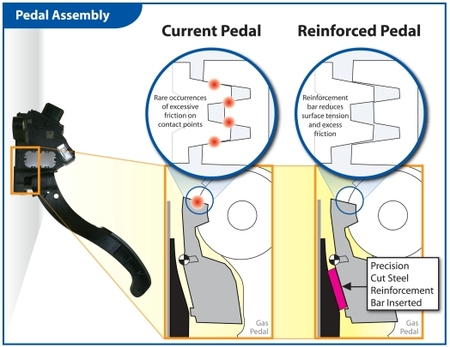 Toyota today announced its remedy for accelerator pedals on eight Toyota-brand vehicle models subject to a recall in the United States. In the accelerator-pedal assembly of affected vehicles, condensation resulting from cold-weather use of the heater or other causes may form on the worn surface of what is known as a friction device. If this occurs, there is a possibility that, in the worst case, the accelerator pedal returns slowly or does not return to its idle position. The remedy involves installing a precision-cut steel reinforcement bar into the accelerator-pedal assembly that creates a space to reduce the surface tension between the friction device and a component called the pedal arm. The bar also strengthens the reaction force of the spring that returns the accelerator pedal to its non-pressed position.

Preparations are now underway to have U.S. dealers apply the remedy to affected vehicles. Priority is placed on addressing vehicles already in the marketplace, and considerations are also being made toward recommencing sales and production of the vehicle models concerned. Toyota plans to implement a similar remedy in Europe, China and other countries and regions, where details are to be worked out with local authorities.