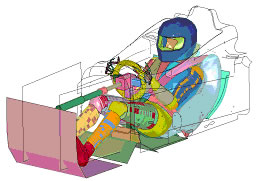 Toyota has developed a computer simulation which recreates high speed accidents and their effects on human physiology. Using the new system called Total Human Model Safety (THUMS), the FIA Institute and Toyota have been able to study the kind of serious injuries that are difficult to measure with conventional crash-test dummies. The results of the new study are in the process of completion. The FIA Institute targeted this technology specifically to help study high speed rear impact crashes in the FIA Formula One World Championship and Indy Racing League (IRL). The THUMS technology has proved a very effective system in analyzing the complex interaction between the driver’s body and the car in a high speed accident.

This cooperative effort has led to a determination of the mechanism for spinal-stress buildup — the result of a combination of g-forces and the unique seating position used in F1 and IRL racecars. The research has prompted considerations for measures to reduce stress on the spine during rear impact collisions. The FIA Institute expects this effort to lead to improved safety for F1, IRL and other single-seater racecar championships.