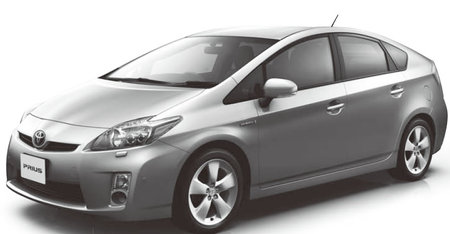 Toyota today announced the launch in Japan today of the third-generation “Prius”, which combines superior environmental performance with improved driving pleasure. The new Prius remains worthy of its name—Latin for “to go before”—by being equipped with the latest in TMC hybrid and other environmentally friendly technology. Its Toyota Hybrid System II (THS II) has been more-than-90-percent designed anew and synergizes with one of the best aerodynamic performances in the world.

This synergy combines with other advances to achieve a world-leadingfuel efficiency of 38.0km/l2, while providing driving performance on par with that offered by a vehicle with a larger 2.4-liter engine. The new Prius comes with four driving modes to match the requirements of specific driving environments, as well as with a solar-powered ventilation system and other dynamic features.

Since becoming the world’s first mass-produced hybrid vehicle in 1997, the Toyota Prius has been sold in more than 40 countries and regions around the world, with cumulative sales having exceeded 1.25 million units as of March 31, 2009. The third-generation Prius will be released in stages in more than 80 countries and regions, as part of an effort to further popularize hybrid vehicles worldwide.