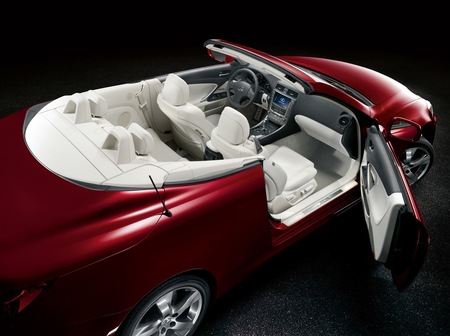 Toyota last week took the wraps off the IS250C four-seat convertible of the Lexus brand featuring an electronically opened aluminum top as an addition to its posh IS250 sedan series. The 4.64-meter-long Toyota Lexus convertible allows a quiet 20-second opening and 20-second closing and is fitted with a six-speed automatic transmission and a 2.5-liter, 215-horsepower V6 engine. Toyota has limited its monthly domestic sales goal to 100 units only due to economic recession.

Toyota is aiming to sell a collective 1,600 units of IS250C a month in 65 countries, including North America and Europe. The four-seat Lexus convertible IS250C is priced at 4.95 million yen for its base model and its L version fitted with leather seats and wood grain trim retails for 5.35 million yen, in Japan.