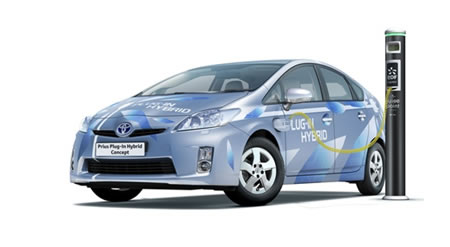 Toyota plans to display the Prius Plug-in Hybrid Concept —a concept vehicle that combines the benefits of CO2 emissions-reducing electrical-outlet battery charging and gasoline-electric hybrid vehicles—at the 2009 Frankfurt International Motor Show (IAA) (Frankfurt Show) to be held from September 15 to 27. The Prius Plug-in Hybrid Concept is based on the third-generation gasoline-electric Prius and is equipped with a lithium-ion battery. A plug-in hybrid vehicle basically operates as an electric vehicle on short trips and as a conventional hybrid vehicle on longer ones.

TMC is developing a plug-in hybrid vehicle that can be charged using external power sources (such as household electricity), based on its hybrid technology, which it has positioned as a core technology for environmentally considerate vehicles. The concept model TMC will display at the Frankfurt Show has a targeted electric-vehicle cruising range of approximately 20 kilometers on a full charge, and its targeted CO2 emissions level is below 60 grams per kilometer.