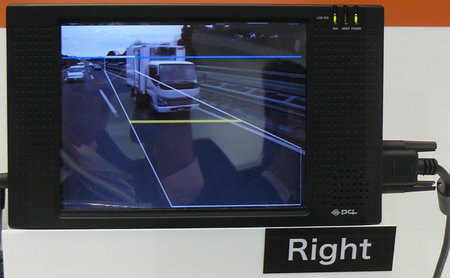 Toshiba exhibited a technology to recognize cars running diagonally behind and display their images on the two monitors used as side mirrors by using “Visconti,” an image processing LSI for vehicles, at Automotive Engineering Exposition 2008. The Visconti is used for the “Intelligent Night Vision System,” a night-vision system mounted on Honda’s high-grade sedan “Legend.” In the demonstration, the images on the two monitors were regarded as the scenes reflected on side mirrors. And the vehicles running from behind in the next lanes were shown on the monitors. 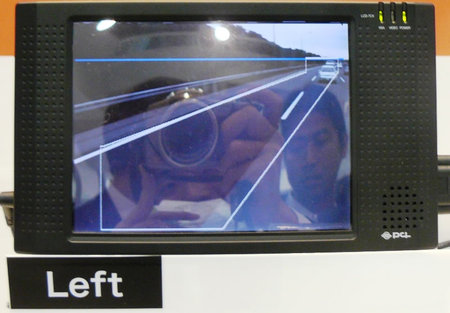 The distance to the approaching car is calculated by the image-recognition technology, and the color of the line shown on the monitor changes depending on the distance. As the distance becomes shorter, the color changes from green to red via yellow. In the demo, the area that the Visconti was processing was surrounded by a white line, and the horizontal line was drawn in blue.