The World’s fastest train with a top speed of 468 kilometers per hour is taking part in full-route tests of the Shanghai-Beijing high-speed railway in China. The Trial runs started on Wednesday, a month before the link goes into service. When the service begins next month, the train will pull 16 carriages and have a passenger capacity of 1,004. A CRH380A bullet train, which is numbered G1, left Beijing South Railway Station at 9:20 am with computers and testing equipment, and after four hours and 48 minutes, it arrived at Shanghai Hongqiao Railway Station. Technical staff on the trial train said testing equipment would collect data including speed, traveling time, distance and arrival time at different stops. A rational timetable will be made based on analysis of the data. The train has an automatic-stop system, which will send out a warning if the speed is over 300 kilometers per hour, and stop the train. Moreover, the system will forbid the driver to run the red light. 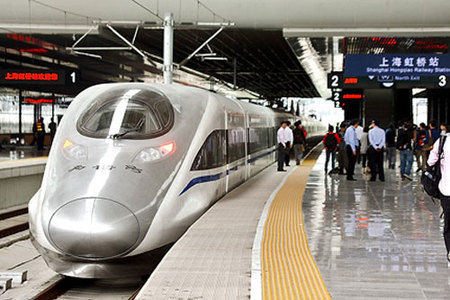 There are three toilets at the juncture between two carriages. The area of a bathroom is only 1.5 square meters but with full-scale facilities, such as a mirror, an armrest, and the emergency call system. Additionally, one of the toilets provides a retractable baby change table. Parents could help the baby with straps to change diapers. Each carriage furnishes two luggage compartments and 10 display boards to indicate traveling information. Commercial operations will start at the end of next month and ticket prices are still under discussion.