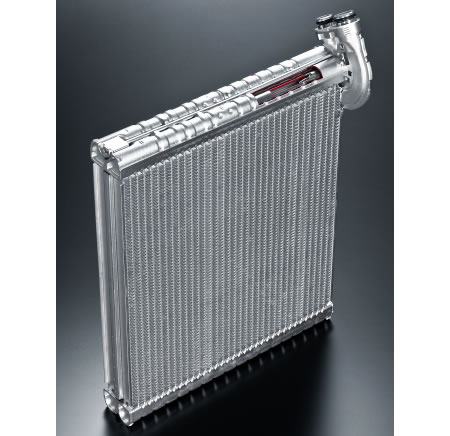 The ejector recovers expansion energy, which was previously lost in the expansion valve, and converts it into pressure energy. This, reduces the compressor’s workload and helps reduce the air conditioner’s overall power consumption.

The ejector cycle system evaporator (ECS evaporator), which is equivalent to the size of a conventional evaporator, can also be applied to conventional air conditioning systems. DENSO Corporation, headquartered in Kariya, Aichi prefecture, Japan, is a leading global supplier of advanced technology, systems and components.The Denso ECS evaporator will be displayed at DENSO’s booth at the Automotive Technology Exposition to be held in Pacifico Yokohama, JAPAN from May 20 to 22, 2009.