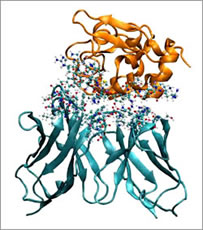 Fujitsu and the Research Center for Advanced Science and Technology (RCAST) at the University of Tokyo today announced that they have jointly built a supercomputer system for use in the development of drugs to treat cancer relapse and metastasis. The new supercomputer is a cluster employing Fujitsu’s PRIMERGY BX922 S2 blade servers. Comprised of 300 nodes, the system features a theoretical peak performance of 38.3 teraflops and will be utilized in performing simulations to design genome-based antibody drugs that treat the relapse and metastasis of cancer.

For the first time ever, this research will use molecular dynamics to design artificial antibody drugs, by simulating the interactions between antigens (proteins), which are part of a cancer cell, and antibodies (proteins). The new system began operations on August 1, 2010.