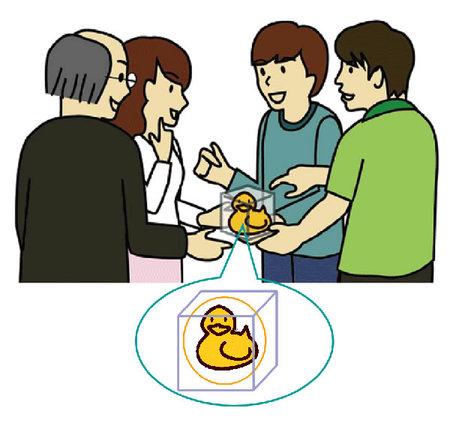 National Institute of Information and Communications Technology (NICT), Japan has developed a small box-like display device that can show 3D images on a palm. The device “gCubik” displays 3D images that multiple people can see at the same time with the naked eye and from various angles. NICT used an applied technology of “integral photography method,” a kind of multiple-lens method. The institute realized parallax in all directions by using a structure where an LCD panel is covered with an array of lenses. This time, those LCD panels are used in three sides that measure about 10 × 10cm each and are adjacent to one another. It looks as if there is a 3D object in the box.

NICT plans to use the display panel in the six sides of the box, make the device wireless and enhance its picture quality, aiming to put it to practical use within three years. The institute expects the device will be used for education, industrial design and game machines. NICT will exhibit the research achievements at 3D Image Conference 2008, which will take place from July 10 to 11, 2008, at the University of Tokyo and SIGGRAPH 2008, which will run from Aug 11 to 15, 2008, in Los Angeles, the US.