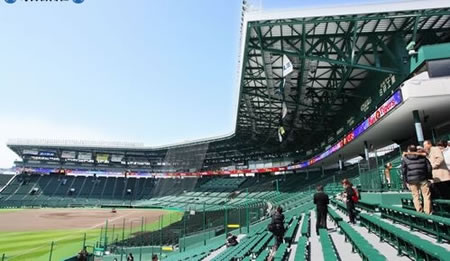 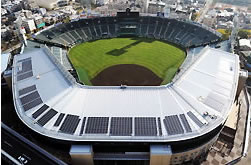 Construction work to install solar panels is in progress on the roof of historic Koshien Stadium in Nishinomiya, Hyogo Prefecture Japan. The Hanshin Koshien Stadium is set to become an eco-friendly arena next year as solar battery panels on the roof above its infield stands are installed. Some 1,600 solar panels — 140 centimeters in width and 80 centimeters in length — are planned to be installed within this year. The solar power system is expected to generate around 193,000 kilowatt hours per year, which will be used within the stadium.

The solar panels will be able to supply 5.3 percent of the stadium’s total power needs and reduce carbon dioxide emissions by about 133 tons per year. Historic Koshien Stadium in Nishinomiya is the oldest and most famous ballpark in Japan and the home of the Hanshin Tigers. It was built in 1924 and has been the scene of many great baseball feats over the years.