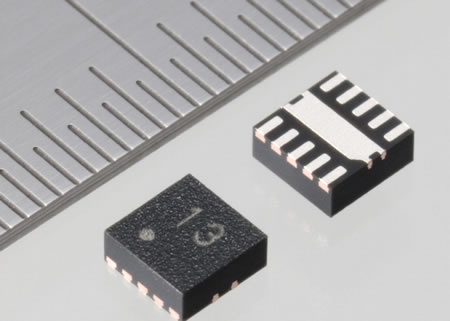 Hitachi Metals Ltd developed a new triaxial acceleration sensor, which the company claims is the worlds smallest. Compared with the company’s existing product, the new piezoresistive-type sensor is 30% smaller in volume and 46% lighter. It is resistant to impacts of more than 20,000g. The maximum detectable acceleration is ±4 or ±8g. In piezoresistive-type sensors such as this, the displacement caused by the acceleration of a weight based on the MEMS technology is detected as a deflection in the silicon beam supporting the weight. The deflection is measured based on the variation of resistance in a piezoresistor formed in the Si beam.

The piezoresistive-type sensor measures 2.5 x 2.5 x 1mm and weighing 14mg and is sealed in a plastic package. Hitachi Metals will start shipping samples in May 2008. The sales targets of triaxial acceleration sensors in total including the latest sensor are ¥2 billion (US$19.4 million) in fiscal 2008.