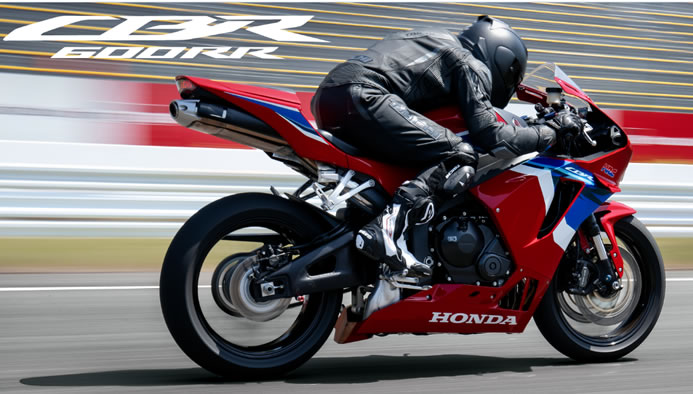 The power unit of the all-new CBR600RR achieves the maximum power output of 89kW. To achieve this higher maximum power, the engine speed at which maximum power is attained was increased by changing materials used for key components such as the camshaft and crankshaft. Both intake and exhaust efficiency also were increased through various measures including reshaping of the inlet port, enlargement of the throttle bore diameter, optimization of the size of various parts of the exhaust pipes, as well as changes in valve timing.

The all-new CBR600RR Super Sports bike is equipped with a throttle-by-wire (TBW) system where the accelerator position sensor (APS) detects the angle of the rider’s throttle grip opening and sends a signal to the ECU. The ECU then sends a drive signal to the TBW motor to control the throttle valve. The all-new CBR600RR also features riding modes that combine different control levels of the Power Selector, HSTC, Wheelie Mitigation Control and Selectable Engine Brake. Riders can select a riding feel in accordance with the riding conditions and their preferences.

To support a fun riding experience, the all-new CBR600RR features the latest electronic control technologies. Made possible by the throttle-by-wire system (TBW) in which the throttle valve is controlled with extreme precision based on the rider’s throttle grip operations, the all-new CBR600RR features the riding mode system which enables riders to select from different riding mode options depending on riding conditions and their preferences.

READ  Why are Japanese cartoons a global hit?

The styling for the CBR600RR incorporates aerodynamic technologies which were fed back from racing activities where aerodynamic performance is thoroughly pursued. Such styling contributed to the improvement of wind-resistant performance and the realization of agile handling by optimizing projected front and lateral areas and achieving the lowest drag coefficient in the class. Moreover, downforce generated by winglets whose position, shape and installation angle are optimized contributes to the improvement of vehicle stability while entering corners or turning while accelerating.

The all-new Honda CBR600RR will come in Grand Prix Red, a tri-color scheme that represents Honda racing technologies. Annual Sales Target (Japan) for CBR600RR is 1000 units. The all-new CBR600RR Super Sports Bike will be available in Japan for approximately 1,606,000 yen ($15,225), including 10% consumption tax.