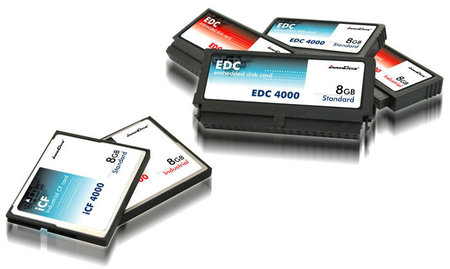 InnoDisk has released the EDC 4000 series of embedded disk card and iCF 4000 series of industrial CF card, which enable faster data transfer speed, more stable performance, and better endurance. With the EDC 4000 and the iCF 4000 series, the data transfer speed can be supported up to 40MB/20MB per second for read/write, claimed to be the best performance for both IDE/ATA and CF interfaces in the industrial embedded system market. The InnoDisk EDC 4000 and the iCF 4000 series was applied with static wear leveling instead of dynamic wear leveling, which enables the Flash chip to perform 4 times longer.

Both series passed the complete and non-stopping power cycling tests for more than 3,000 times, which avoids the possibility of data lost or bad blocks of Flash chips from sudden power disconnection. EDC 4000 and iCF 4000 series contribute to In System Programming architecture (ISP), which helps the firmware to be upgraded more easily. InnoDisk was founded in March, 2005 and owns the best R&D elites of Taiwan flash storage industry.