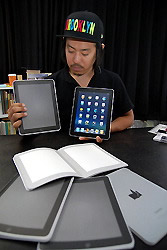 A company run by students in Japan is enjoying brisk sales of its Padnote – a notebook which looks just like Apple iPad tablet. The unique product has been developed and released by Gocco. — a start-up business established by students at the Institute of Advanced Media Arts and Sciences (IAMAS) in Ogaki, Gifu Prefecture, Japan. The notebook with gridlines is designed to facilitate drawing. In collaboration with a printing firm near the college, they have managed to imitate the exterior appearance of the iPad, including its texture and control buttons.

The product went on sale online in May, and gained unexpected popularity for its unique design and cheap price of only 735 yen apiece. The notebook is available at Tokyu Hands department stores and the company had sold a total of some 2,000 notebooks online and over-the-counter by the end of July