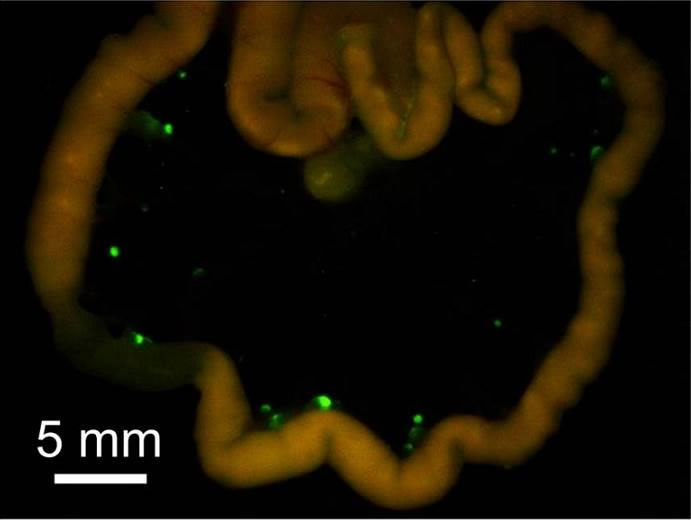 A Japanese Research team at the Graduate School of Medicine, the University of Tokyo led by Professor Yasuteru Urano announced the development of a fluorescence reagent that makes Cancer Tissues Glow during Surgery. The fluorescence reagent is sprayed on suspicious areas during a surgical operation to make cancerous tissues emit light, making it possible to distinguish cancerous tissues from healthy tissues. Thje research team developed a sprayable fluorescence reagent, exploiting the fact that the activity of sugar chain-decomposing enzymes is high in cancer cells. The reagent itself is colorless and transparent and is not fluorescent. But when it reacts with β-galactosidase, which is contained in cancer cells, its structure changes, emitting a strong fluorescent light. β-galactosidase is a sugar chain-decomposing enzyme whose activity is believed to be strengthened in ovarian cancer, breast cancer and colon cancer cells.

Though several fluorescence reagents have been developed for β-galactosidase, it is difficult to use them for cancer detection because of their low sensitivities. This time, the research team optimally designed the structure of the reagent molecule. When it reacts with β-galactosidase, it emits a more than 1,000 times brighter light, making it possible to detect the activity of cancer cells’ β-galactosidase. In a verification test, various types of ovarian cancer cells were transplanted in the abdominal cavity of a mouse, and this reagent was administered to the mouse. As a result, minute cancer tissues (smaller than 1mm) were detected with a high accuracy. And many types of cancer cells were detected. The fluorescent light emitted from the cells was very bright and visible to the naked eye. Also, minute cancer cells inside the abdominal cavity of the living mouse were detected with a fluorescence endoscope and successfully removed by using the light as a guide. The group is conducting a verification test by using patient-derived samples for surgical operation, aiming to perform a safety test, etc and apply it to clinical tests.