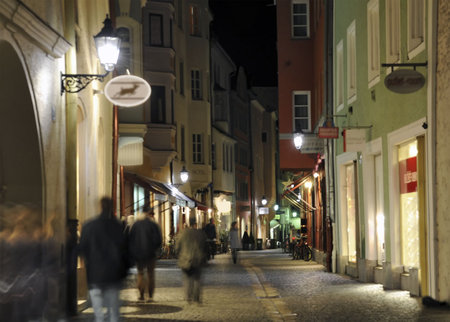 In Regensburg, Osram Opto Semiconductors and Siemens have demonstrated that energy-saving LEDs can provide authentic period-style lighting for a historical centre. Regensburg has narrow alleys and many winding streets in a multitude of different lengths and widths. And this is why the intricately structured town needs luminaires which enhance its historical ambience. The street lights must not be dazzling in residential areas, for instance, nor should they spoil the romantic atmosphere of candle-lit restaurants. Discreetly installed in the luminaires prescribed by the Office for the Preservation of Historical Monuments, they target the precise spot they are intended to illuminate, thus avoiding light pollution.

The prototype luminaire permits the replacement of ordinary 90 W mercury vapour lamps with LEDs. The luminaire design is based on a cylinder. Manufactured by the Regensburg branch of Siemens, the prototype can be fitted with different numbers of LEDs on either side as required and so as to produce the desired lighting effect. The LEDs have a color temperature of 3500 K and a color rendering index of 80. A common optical device combines the light from the individual LEDs into a single beam and accurately directs it towards the desired target.