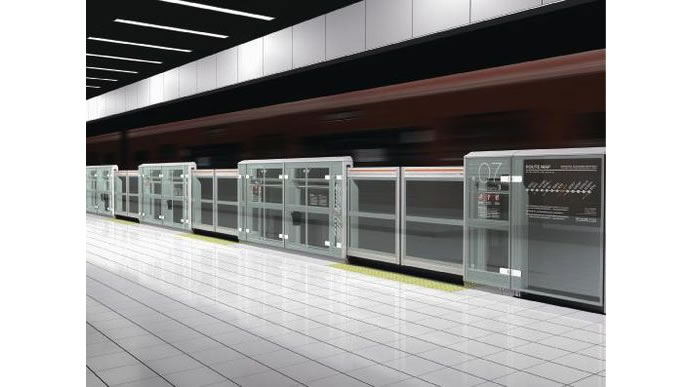 MHI-TES, a group company of Mitsubishi Heavy Industries, has developed an improved platform door system, dubbed Dokodemo Door that can flexibly accommodate the operation of railway cars with varying numbers of doors per car (2 to 4) and door locations. Among the new system’s improvements are enhanced safety features and greater adaptability to shifting door locations when a train stops. Total system costs, from installation through operation, have been reduced through the development of lighter doors and shorter time required for installation.

A number of new safety features have been incorporated. These include area detection sensors that detect people or their belongings, triggering a broadcast warning message and simultaneously preventing the doors from opening or closing; and new projectors or LEDs in the door casings that contain built-in opening/closing mechanisms, a feature whereby warning messages are projected on the doors’ reinforced glass or displayed as LED-configured warning messages. Dokodemo Door means Anywhere Door in English. The new system is now undergoing verification testing at the Wadaoki Plant of MHI’s Mihara Machinery Works in Hiroshima.