The new MT9 format first conceived by Electronics and Telecommunications Research Institute, Korea and being shaped into commercial use by venture company Audizen, has separate controls on the sound volume for each musical instrument, such as guitar, drum, base and voice — an ideal tool for music lovers of different tastes as well as karaoke fans. The new MT9 format, which has a file extension format of MT9 and a commercial title of Music 2.0, is poised to replace the popular MP3 file format as the de facto standard of the digital music source. The distinctive feature of MT9 format is that it has a six-channel audio equalizer, with each channel dedicated to voice, chorus, piano, guitar, base and drum. For example, if a user turns off the voice channel, it becomes a karaoke player. Or one can turn off all the instruments and concentrate on the voice of the main singer as if he or she is singing a cappella. Korean Giants Samsung and LG are both interested in equipping their mobile phones with an MT9 player and their first commercial products are likely to debut early next year. 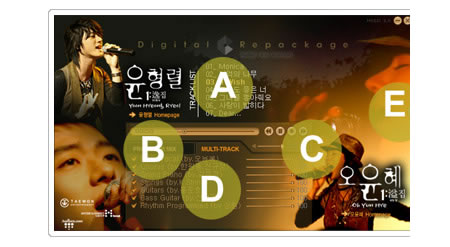 If selected as an international format, the MT9 technology can earn big for both Audizen and ETRI, a Korean governmental research institute. ETRI said that it holds three international and six domestic patents for the technology and is planning to file two more this year. The MT9 files are served in an album package. Audizen is currently selling a limited choice of albums at 2,000 won to 3,000 won on its Web site.