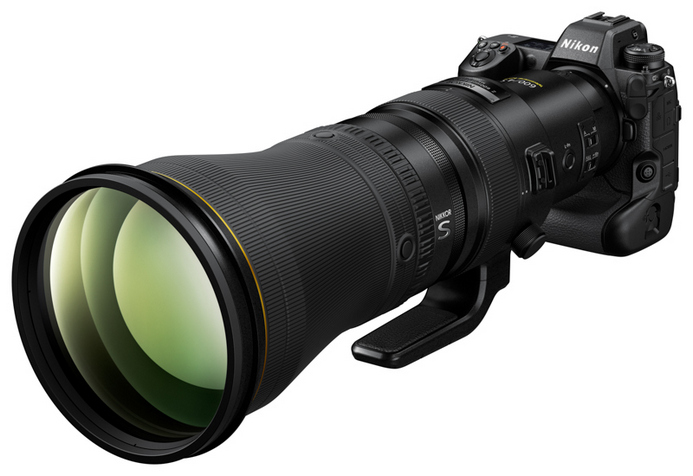 Nikon today announced the release of the NIKKOR Z 600mm f/4 TC VR S, a fast, super-telephoto prime lens that is compatible with full-frame/FX-format mirrorless cameras for which the Nikon Z mount system has been adopted. The NIKKOR Z 600mm f/4 TC VR S, the super-telephoto prime lens which belongs to the S-Line of NIKKOR Z lenses, pursues the ultimate in optical performance. It features a built-in teleconverter that extends the focal length by 1.4x, enabling coverage of two focal lengths — 600 mm and 840 mm.

The lens employs Meso Amorphous Coat that boasts the highest anti-reflection performance in NIKKOR history. The combination of Meso Amorphous Coat and Nano Crystal Coat synergistically works to greatly reduce ghost and flare. This allows users to concentrate on shooting without restrictions on composition, even in situations where strong light sources are likely to be included in the frame, such as outdoors or under stadium lights.

Various aberrations are effectively compensated with the adoption of three ED glass, a super ED glass, two fluorite lens, and two SR lens elements for the lens optics. Superior sharpness and detail are possible even at the periphery of the frame from the maximum aperture, and outstanding image quality is realized even when the built-in teleconverter is used. A fast maximum aperture of f/4 makes the lens ideal for photographing rapidly moving subjects, such as at motorcycle racing events, as well as for three-dimensional rendering with natural bokeh.

Superior dust- and drip-resistant performance is ensured by sealing adopted in various areas including movable parts of the lens barrel as well as a rubber gasket around the lens mount, while excellent anti-fouling performance is achieved with a fluorine coat on the surface of the front-most lens element.

With a weight of approximately 3,260 g, it is roughly 550 g lighter than the AF-S NIKKOR 600mm f/4E FL ED VR, even with the addition of a built-in teleconverter. With a total length of approximately 437 mm, the lens is small enough to be stored in a bag that meets carry-on standards for international flights. The new NIKKOR Z 600mm f/4 TC VR S will be available in late November 2022 for a suggested retail price of $15,499.95.