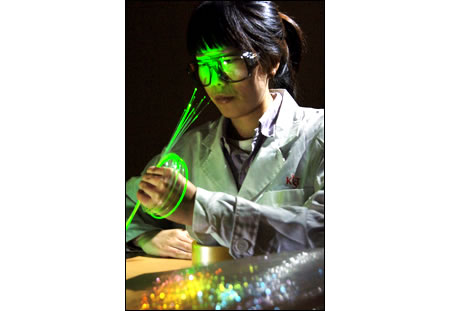 Optical fiber made of plastic can increase home Internet speed by 25 times!

The Korea Institute of Science and Technology has developed an optical fiber made of plastic that can increase home Internet speed by 25 times, theoretically. The research team led by Hwang Seung-sang said it has succeeded in making a home network system using the new data communication cable after six years of experimenting. The plastic optical fiber can transmit electric data at up to 2.5 gigabits per second, while most home Internet lines, made of copper, can carry only 100 megabits of data per second. The plastic fiber is expected to be a highly practical solution as a “last-mile” link between town-to-town data cables and personal computers, they said. Plastic fibers have characteristics that fall between the copper and glass-fiber cables. They can be bent and easily connected with each other, and are much faster than copper lines though not as fast as the glass fibers. They are capable of transmitting 6,000 digital phones a second, KIST said.

Japan’s Asahi Glass and others have commercialized similar technologies. But KIST said that its product is superior in quality and its price is only one third of Japan’s. Four companies and 10 universities have participated in the joint research team for the plastic cables. The schedule for commercial production has not been announced yet.