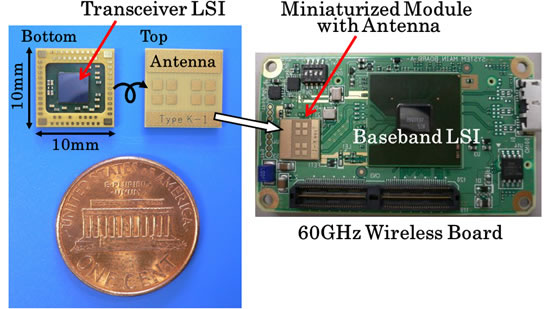 Panasonic has developed technologies to reduce performance errors and maximize the transistor performance in chips for multi-gigabit wireless utilizing the 60GHz wireless band, which is expected to be the future of high-speed wireless communication. The transceiver LSI also features an integrated miniaturized module including an antenna, which contributes to the realization of stable high speed wireless communication for mobile devices. The chipset incorporates built-in self-calibration to compensate for performance errors, improving the modulation accuracy more than 1.5 times.

This makes it possible to reduce the circuit design margin, leading to the improvement of the stability of wireless communications with less than 1W power consumption. By integrating the transceiver LSI into the miniaturized module, the chipset can be implemented in mobile devices, enabling the easy exchange of the rich content, such as high definition videos, among mobile devices wirelessly.