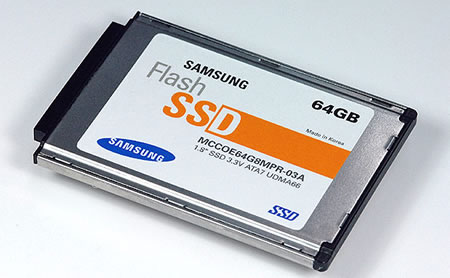 Samsung Electronics Co., Ltd, has developed a 1.8”-type 64 Gigabyte (GB) flash-solid state drive (SSD).The new flash-SSD is based on an eight gigabit (Gb) single-level-cell (SLC) NAND, which provides significantly higher performance over conventional SSDs. The read and write performance of the new SLC flash-SSD have been increased by 20 percent and 60 percent respectively over the 32GB flash-SSD Samsung introduced last year, meaning that the new SSD’s ability to outperform conventional rotating-media hard drives is even greater than had been anticipated.

Besides the use of the 64 GB flash-SSD for notebook PCs, 8~16GB flash-SSDs will become viable solutions for use in personal navigation systems and digital camcorders, as will hundred GB-level flash-SSDs for use in the server market. Samsung plans to start mass production of the 1.8”-type 64GB flash-SSD in the second quarter of this year.