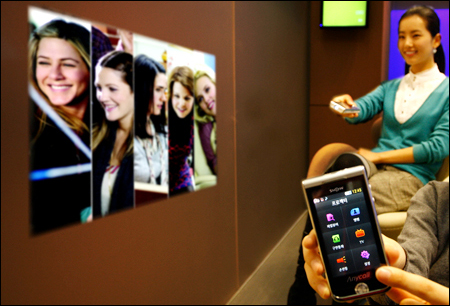 Samsung today unveiled the Worlds first mobile phone I7410 in Europe and W7900 in Korea to feature embedded projection capability. The Samsung mobile uses Texas Instruments’ (TI) DLP Pico Chipset. The DLP Pico Projector is not only the feature of I7410 as it features an OLED color touch-screen and five-megapixel camera. The Texas Instruments’ (TI) DLP Pico Chipset is 20 percent smaller than existing types but can provide brighter image projections with double the resolution and higher power efficiency.

Samsung I7410 phone is available in Korea for approximately $670 and will make its official European debut in the coming months. Samsung hasn’t yet set details, including prices for the North American and European launches.