In the latest twist to Apple’s patent battle with Samsung, the Korean tech titan has turned to Hollywood to help refute the claim that it copied elements of the design and user interface of Apple’s iPad 2. Samsung submitted Stanley Kubrick’s classic 1968 science-fiction movie “2010: A Space Odyssey” as evidence at a hearing in the U.S. on Monday to show that Apple never had a monopoly on the design elements in question, German software patent blog FOSS Patents said on Wednesday. The hearing at the U.S. District Court for the Northern District of California was set to deliberate on Apple’s motion for a preliminary injunction banning sales of Samsung’s smartphone Galaxy S and tablet PC Galaxy Tab 10.1. 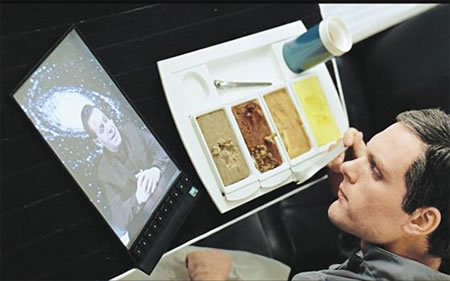 Samsung cited a scene from the movie that shows two astronauts eating with tablet-like gadgets next to them. The gadgets are thin and rectangular-shaped, with huge display screens and borders less than 1 cm wide. As they resemble modern-day tablet PCs, such as the iPad and Galaxy Tab 10.1, Samsung contended that the iPad could hardly be considered an “original” design as the movie was dreamt up over four decades ago.

2001: A Space Odyssey is a 1968 American epic science fiction film produced and directed by Stanley Kubrick, and co-written by Kubrick and Arthur C. Clarke. The film deals with thematic elements of human evolution, technology, artificial intelligence, and extraterrestrial life. It is notable for its scientific accuracy, pioneering special effects, ambiguous imagery that is open-ended to a point approaching surrealism. 2001: A Space Odyssey is today recognized by many critics and audiences as one of the greatest and most influential films ever made.
Source:-