Seven-Eleven Japan and Toyota announce today details of a joint project to reduce CO2 emissions. Seven-Eleven and Toyota entered into a basic agreement in August 2017 regarding considerations toward energy conservation and carbon dioxide emission reduction in store distribution and operation. Toyota has been investigating the use of newly developed fuel cell trucks and fuel cell generators, and the project will be implemented in stages starting in 2019.
The project aims to introduce technologies and systems developed by Toyota in Seven-Eleven store operation and distribution, reducing CO2 emissions. Stationary fuel cell generators (FC generators) and rechargeable batteries will be introduced at stores, managed centrally by building energy management systems (BEMS), raising the proportion of renewable energy and electric power derived from hydrogen used. A newly developed small fuel cell truck (small FC truck) will be introduced in the distribution process, aiming to achieve zero emissions of substances of concern including CO2.

On December 7, 2017, Seven-Eleven opened the environmentally, user friendly Seven-Eleven Chiyoda Nibancho Store as a flagship of these initiatives. The second such store, the Seven-Eleven Sagamihara Hashimotodai Itchome Store, opened on May 22, 2018, with renewable energy accounting for 46 percent of the store’s electric power usage. Two small FC trucks are intended to be introduced within the Tokyo metropolitan region in approximately spring 2019, and operations next generation stores are expected to commence in approximately autumn 2019. 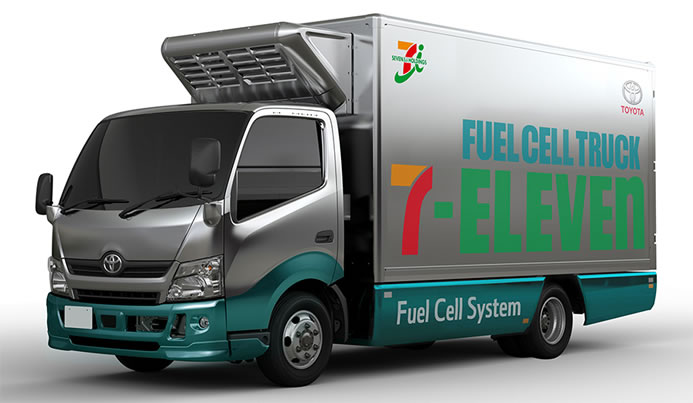 Seven-Eleven Japan and Toyota will investigate ways to procure renewable energy and use energy efficiently, aiming to shift the energy used in stores to renewable energy and low-carbon hydrogen. Rechargeable batteries and stationary FC generators will be installed in stores and small FC trucks will be introduced for deliveries to reduce CO2 emissions. Performance, costs, durability, and CO2 reduction effects will be evaluated with the aim of promoting further deployment.
Click for more details of the joint project 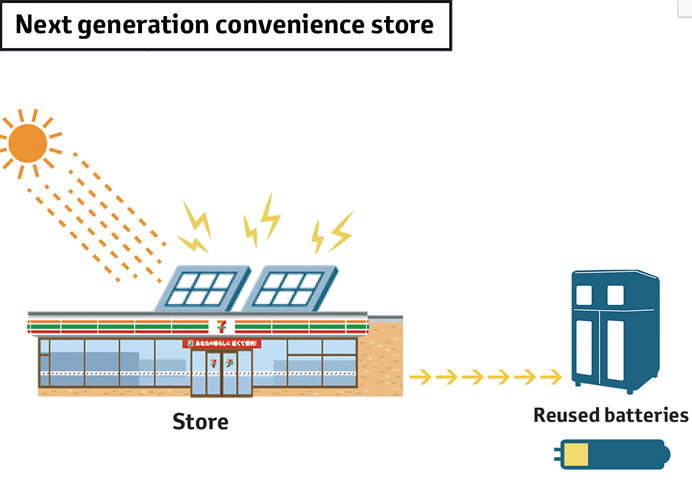