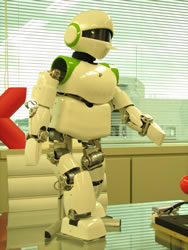 ZMP Inc. has developed “PINOver.3,” the latest version of its humanoid robot. It employs Harmonic Drives in 12 drive parts provided in its legs. The new robot boasts improved motion performance and walking stability because it includes little backlash, thereby allowing targeted control. Improvements are made in which the rotation axis in the pitch direction among three axes in a hip joint is driven by a belt. Therefore, roll, pitch and yaw axes can be disposed so as to orthogonally intersect each other, facilitating the movement calculations. In the ver.2 robot, the pitch axis was provided below the roll axis to result in a displacement between the rotation axes. This tended to require more complicated calculations. In the latest version, roll and pitch axes in an ankle are also driven by a belt so that these axes are disposed orthogonally to each other. In addition, the company has achieved other improvements, e.g. adoption of a USB interface for connection with the host computer for control. 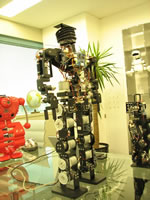 The new robot has taken over the control system used in the company’s other bipedal robot “e-nuvo.” ZMP plans to add a battery and a PC card to the robot to enable autonomous walking without connecting to a personal computer. Further, the company intends to improve the walking motions so that the robot can walk on the stairs and slopes. The price is ¥2,900,000($25,140) for the main body and ¥4,500,000($39,010) including the cover (both including the provision of the development environment). Shipment is slated to start in mid-September 2006.
Via Tech-On