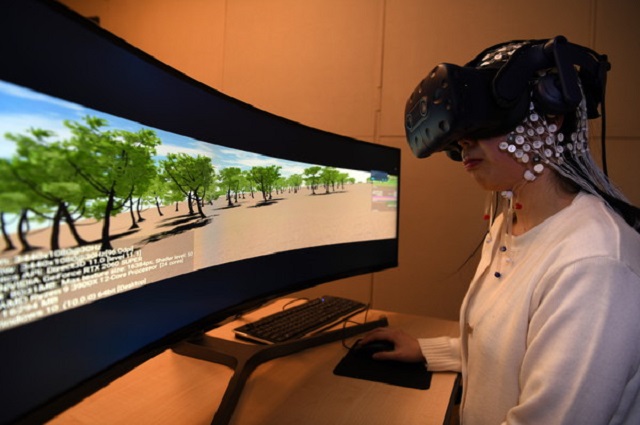 A research team from the Korea Research Institute of Standards and Science (KRISS) today announced the development of a new technology for the first time that can quantitatively measure the degree of virtual reality (VR) sickness. Thus far, VR sickness has to be evaluated subjectively through questionnaires. The KRISS research team succeeded in quantitatively analyzing the degree of VR sickness by measuring the activities of brain waves and certain regions of the brain that undergo changes during VR use.

VR content used in various areas, including medical science, gaming, sports and education, in general, requires users to wear goggle-type headsets. The problem, however, is that a higher degree of immersion brings about a higher level of sickness.  When wearing google-type VR headsets, rapid eye turns lead to unbalances between the eye’s visual information and the body’s position information, thereby causing the VR sickness. The research team measured the change in the activities of brain waves after showing its ‘cyber sickness standard video’ to 21 participants in the experiment.