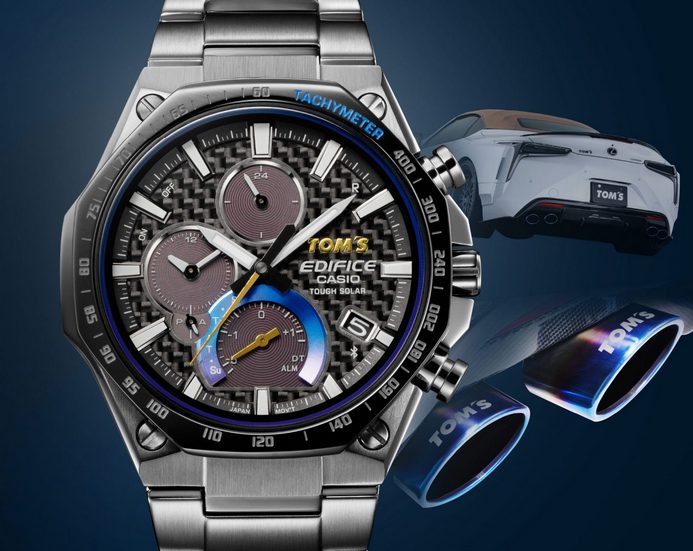 Casio announced today the release of the latest addition to the EDIFICE line based on the brand concept of Speed and Intelligence. TOM’S Limited Edition EQB-1100TMS is a collaboration model designed with TOM’S to evoke the luxury sports cars that are the team’s specialty. TOM’S is a top Japanese racing team competing in the most prestigious races in Japan, with a number of SUPER GT and SUPER FORMULA championships under its belt.

TOM’S is a top Japanese racing team competing in the most prestigious races in Japan, with a number of SUPER GT and SUPER FORMULA championships under its belt. The company also brings the technologies it cultivates for racing to its aftermarket parts and custom cars. With the TOM’S team needing watches that would allow members to share precise timing during races, Casio has been a sponsor since 2013 through EDIFICE, its line of timepieces inspired by a motorsports worldview.

The third collaboration between TOM’S and Casio, the EQB-1100TMS is a high-performance timepiece featuring a slim case at just 8.9mm and a design inspired by TOM’S luxury sports cars. The watch design features a black and grey metal exterior, a dial made with carbon fibre, and heat gradations with hues shifting from gold to red to blue reminiscent of the look of hot titanium tail pipes.

Color gradation around the perimeters of the sapphire crystal and the inset dial at the 6 o’clock position recreates the changing color of a sports car’s titanium tail pipe when the exhaust heat causes the titanium to turn bluish. Every detail was created under TOM’S supervision, including the octagonal bezel finished with black ion plating and the gray ion-plated case and band, for a chic timepiece as impressive as the company’s luxury sports cars.

The EQB-1100TMS is equipped with Mobile Link functions that pair via Bluetooth to a smartphone. When used with the dedicated EDIFICE Connected app, the watch automatically adjusts the time and enables the wearer to use their smartphone to easily select any of approximately 300 cities for world time and display the time in two cities. The Tough Solar charging system converts light to power the watch for practicality and convenience.