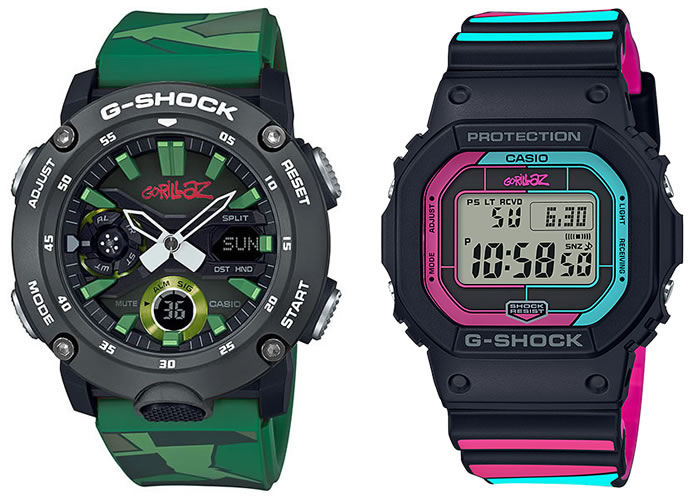 Casio announced today an exclusive collaboration between its G-SHOCK brand of shock-resistant watches and the world-famous British virtual band Gorillaz. The collaboration models, the GW-B5600GZ and GA-2000GZ, are designed with motifs and colors inspired by covers of Gorillaz albums. Virtual group Gorillaz is one of the leading bands in Britain and is made up of a quartet of animated characters: 2D, Murdoc Niccals, Noodle, and Russel Hobbs. The band’s genre-bending music and unique characters have earned it a popular following among younger demographics and Gorillaz is recognized by The Guinness Book of World Records as the planet’s Most Successful Virtual Act.

The base model for the new GW-B5600GZ is the square-shaped GW-B5600 digital watch with Bluetooth communication and solar-powered radio control. The watch features a black watch face, and the band features a combination of pop blue and pink inspired by the hues from the latest Gorillaz album NOW NOW. The message NOW floats onto the display whenever it is illuminated with the LED backlight.

The base model for the new GA-2000GZ is the digital-analog combination watch GA-2000, which employs a new carbon construction with the ability to switch watch bands. The entire watch band features a vivid green camouflage pattern inspired by the cover of Gorillaz’s eponymous first album. A second watch band is included and features a darker-hued camouflage pattern, so that users can coordinate with their clothing.

Gorillaz shares with G-SHOCK a continual willingness to think outside the box and try new things, which led to a partnership in 2018. The partnership resulted in a series of special videos that made waves, featuring father of G-SHOCK Kikuo Ibe guesting and interacting with the members of Gorillaz. The GW-B5600GZ and GA-2000GZ come in special packaging that matches the respective colors of the watches, showcasing two collaboration models that richly evoke the world view of Gorillaz .