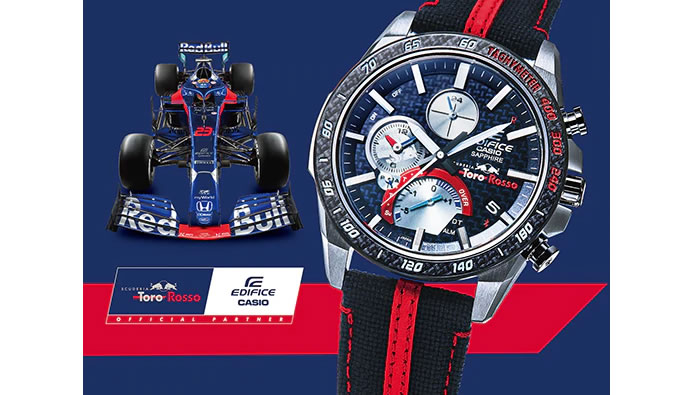 Casio today announced the release of new additions to the EDIFICE line of high-performance metal chronographs based on the brand concept of Speed and Intelligence.  The EQB-1000TR and EFR-S567TR slim-profile chronographs were developed in collaboration with the Scuderia Toro Rosso Formula One Team, which competes in the world’s highest class of auto racing. The EQB-1000TR and EFR-S567TR are designed based on the Scuderia Toro Rosso STR14, the new 2019 Formula One racing car. Adopting the racing car’s color scheme, the new chronographs feature blue, red and silver.

The entire EQB-1000TR and the dial of the EFR-S567TR adopt an eye-catching red stripe motif on a blue background, representing the team colors. In both models, the entire dial, excluding the bezel and inset dials, is made of carbon fiber. Based in Faenza, in northern Italy, Scuderia Toro Rosso is a racing team with many young, up-and-coming drivers. The dial and case back feature the team logo, and the inset dial in the 9 o’clock position has an image of a bull, the team symbol. The new models are infused with the worldview of Scuderia Toro Rosso, and offer a special feeling that makes them a treasure just to own.