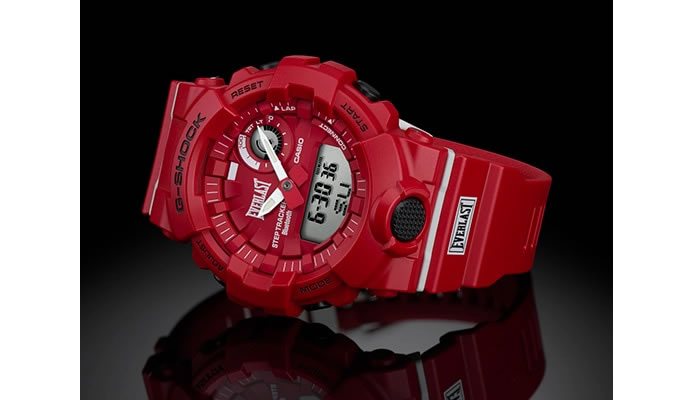 Casio today announced a new G-SHOCK watch GBA-800EL, made in collaboration with the legendary boxing brand, Everlast (Everlast is the world’s leading manufacturer, marketer and licensor of boxing, MMA and fitness equipment). Based in Manhattan, Everlast’s products are sold across more than 75 countries and 6 continents.  When paired with a smartphone via Bluetooth, the watch automatically sends the measured data to the G-SHOCK Connected app four times a day, and the user can also do manual transmissions. The app can display the steps taken, calories burned, and step count graph broken down by five metabolic equivalent (MET) levels for each day, week and month.

The new Casio GBA-800EL from the G-SQUAD line of fitness watches arrives in a matte red reminiscent of boxing gloves, with the world-famous Everlast logo engraved on the case back. The distinguished logo also appears on the dial and band, and the LED backlight illuminates to show what Everlast has become known for being, the Choice of Champions. The GBA-800EL is powered by a CR2016 battery and the battery life is approximately 2 years. The watch weighs approximately 61g.

The GBA-800EL is equipped with a three-axis acceleration sensor to keep track of step count as well as walking/running pace. The digital display shows the step count and hourly step graph, and the status indicator displays the target achievement rate. By linking with the smartphone’s GPS function, the app can also display the exact location on a map where the wearer’s steps were taken; calories burned and MET levels, providing a whole new way to use G-SHOCK for training.

User can configure up to 20 sets of five timers on the app. Create workouts with timers for interval training. Call up the created workout and send it to the watch to start the training right away.