Casio announced today the release of new additions to its line of SHEEN metal watches for women – SHE-3055 and SHE-3057. The new Casio SHEEN SHE-3055 and SHE-3057 feature a dial made from elegant mother of pearl laid in a mosaic pattern. The mother of pearl gives a lustrous finish that beautifully reflects the light with every wrist movement, presenting a different look at every angle 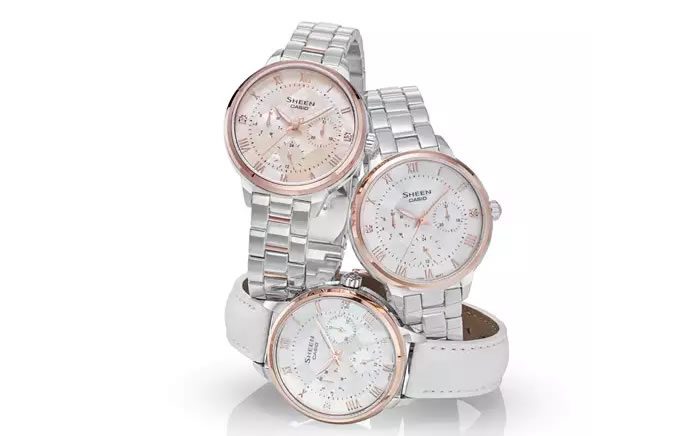 The new watches features three inset dials indicating the day of week, date, and 24-hour clock and are water resistant to 50 meters. The Casio SHEEN SHE-3055 and SHE-3057 watches combines an elegant look with performance suitable for work and every day wear for women who lead the way in life both professionally and outside of work. . The index marks feature simple Roman numerals and incorporate two SWAROVSKI Crystals, adding to the beauty and elegance of the dial.

Casio launched the SHEEN line of metal analog watches for women who shine in 1999. The SHEEN watches are based on the concept of Elegant, Smart, Shining. The new watches with 3 years battery life, weighs approximately 83g ( E-3055SG / SHE-3055SPG).