Casio announced today the release of the BGD-500, an anniversary model that reproduces the styling of the DW-520, the first ever BABY-G watch launched in 1994, to mark the upcoming 20th anniversary in December 2014 of the BABY-G brand of casual watches for women. The BGD-500 is the 20th anniversary model of the BABY-G, which started the trend of using digital watches as fashion accessories. The BGD-500 reproduces the styling of the original DW-520, including a simple square form that symbolizes the watch’s toughness, a protector that gives an impression of its shock resistance, and a cute roundish G logo. The new watch features water-resistance of up to 200 meters, better than that of the original model, living up to the BABY-G commitment to constant progress. 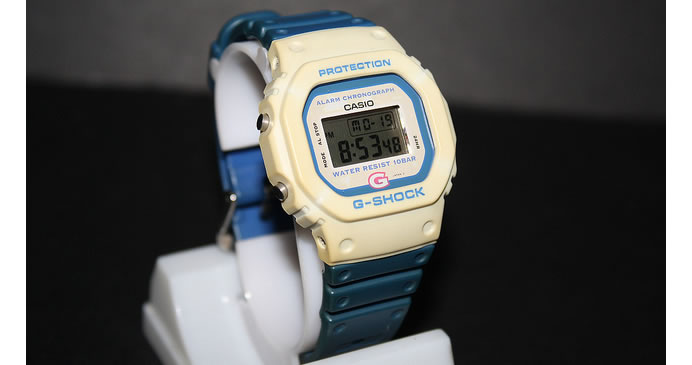 The original DW-520 model inherited the shock resistance and toughness of the G-SHOCK in a smaller case to fit women and pop coloring, expressing the design concept of Tough & Cute. Gaining popularity especially among young ladies in their late teens, the BABY-G blazed a trail for digital watches to become a part of women’s fashion. Since then, the lineup has been expanded with continually advancing features and designs. Today, the BABY-G has grown into a women’s brand that has sold more than 30 million units.

Symbolizing the rich color variations that are one of the appeals of the BABY-G brand, the lineup includes models in three colors: the turquois blue used in the original DW-520; black, which is the brand color of G-SHOCK watches; and the same yellow used in the limited edition model of the original DW-520. The packaging is printed with “20th Anniversary” and two stars, completing this watch as a special release befitting the 20th anniversary of the BABY-G brand.