Fujitsu Laboratory today announced the development of a compact and lightweight wearable ring-type device that offers handwriting-input functionality and a reader for near-field communications (NFC) tags. The ring-type wearable device that Fujitsu Laboratories developed identifies the fingertip movements users make as they write in the air, and recognizes that tracing as a letterform. By writing in the air with one’s fingertip, operators can select menu options or make memos on photos that they take in the field. To begin air-writing, the operator uses their thumb to press an operation button, which makes it easy to operate using just one hand without operation errors. 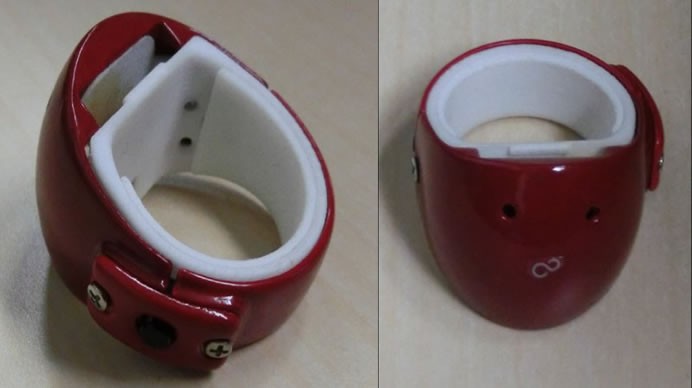 By applying proprietary technology that corrects the letterform tracings, Fujitsu Laboratories has been able to improve character recognition accuracy, enabling recognition of everything from numbers to Chinese characters. Furthermore, with a built-in NFC tag reader, operators can specify an object to be worked on with a touch on its NFC tag and display an operation’s details. As data from the object to be worked on can be easily selected in a hands-free manner, the performance of maintenance and other tasks is expected to be more efficient. The new ring device compresses the ability to perform a variety of input operations into a device weighing less than 10 grams that is worn on a finger.Fujitsu Laboratories is testing the real-world usability of the device in the field with a goal of practical implementation during fiscal 2015.