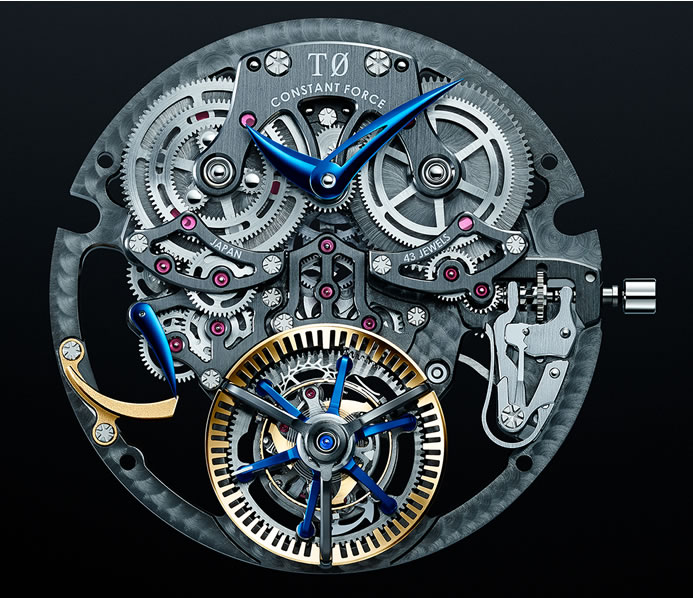 Grand Seiko revealed the T0 (T-zero) Constant-force Tourbillon (abbreviated as “T0”) as a concept creation of Grand Seiko in September 2020. The new creation is a masterwork and true revolution in watchmaking design and fully reveals the Grand Seiko designers’ capabilities and ingenuity. It represents the world’s first movement with a fully integrated constant-force and tourbillon on the same axis, aiming to create a mechanical watch with the highest accuracy possible.

The constant-force mechanism provides even energy distribution to the escapement regardless of how much the mainspring is wound, and the tourbillon eliminates the error in precision caused by gravity by incorporating the escapement parts and balance in a rotating carriage. These two mechanisms alone require exceptional design and manufacturing technologies, and the integration of the mechanisms as one unit is a patented design that achieves a new level of accuracy for Grand Seiko’s mechanical watchmaking.

Kawauchiya Product Development Dept. of Seiko Watch, created the world’s first movement with a fully integrated constant-force tourbillon on the same axis. Historical value of this masterpiece is further raised. All components including the main plate and bridges, are hand finished by their craftsmen and women, taking more than 3 months. The finish is equivalent to that of the most luxurious Swiss-made watches. The expertise was effectively applied in 9SA5 as well.

Ever since the first Grand Seiko watch was born in 1960, the pursuit for high accuracy has been fundamental in every Grand Seiko timepiece and innovation. T0 (T-zero) Constant-force Tourbillon is displayed on the second-floor lounge of the Grand Seiko Studio Shizukuishi,  in Shizukuishi, Morioka. The rotating tourbillon and intermittent turning of the constant-force as well as the rhythmical 16th note ticking sound of the mechanisms can be thoroughly enjoyed.