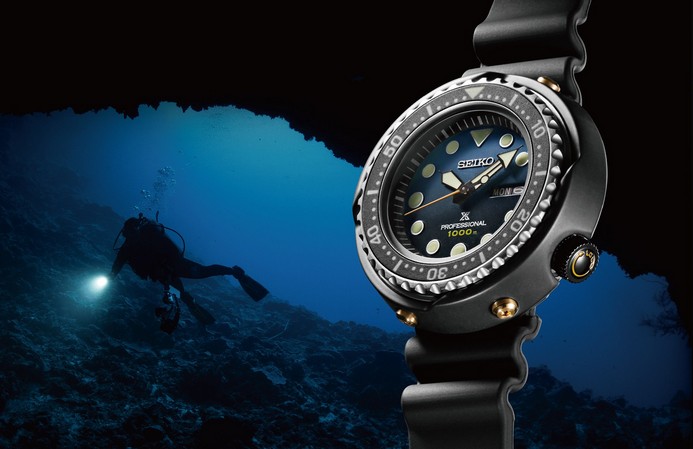 In 1986, Seiko launched a diver’s watch that set a new standard. It combined Seiko’s legendary 1975 design with a 1,000-meter water resistance for saturation diving with a quartz movement that delivered an accuracy that no mechanical diver’s watch could match. At the time, and still today, it was recognized as one of Seiko’s most important diver’s watches. Today, 35 years on, this classic Seiko Diver’s watch is re-born with new design features and upgraded professional diver’s watch specifications. This is a watch that truly lives up to the promise of the Prospex name.

The Seiko X Prospex  watch inherits all the important design features and innovations which made both the 1975 mechanical and the 1986 quartz original so greatly trusted by the professional diving community. It has the 1,000m water resistance and helium resistance and incorporates the unique one-piece titanium case with its outer protector structure that makes its shock resistance so exceptional.

It also has the accordion-style strap that ensures that the watch remains tight on the wrist at every depth. The outer protector is made of zirconia ceramic, which is seven times harder than steel, further enhancing its resistance to shock. The strap is made of high grade, strong yet flexible silicone.

As a new safety and design feature, the crown is marked with a vivid yellow “Lock” sign and an arrow to indicate the rotating direction. The winding stem is also in yellow so that the wearer can immediately notice if the crown is unlocked. The white hour markers stand out against the dark dial so that they are easy to read at depth.

The watch is equipped with Seiko’s tried and trusted quartz Caliber 7C46. It also delivers a reassuringly long battery life of 5 years.

The new The Seiko X Prospex watch will be available in July 2021 as a limited edition of 1,200 at selected Seiko Boutiques and retail partners worldwide for approximately $3270. The watch is offered with extra-strength silicone straps in both black and blue-gray, ensuring wearability both on a wetsuit and directly on the wrist. Each strap features the text FOR SATURATION DIVING 1000m in yellow.