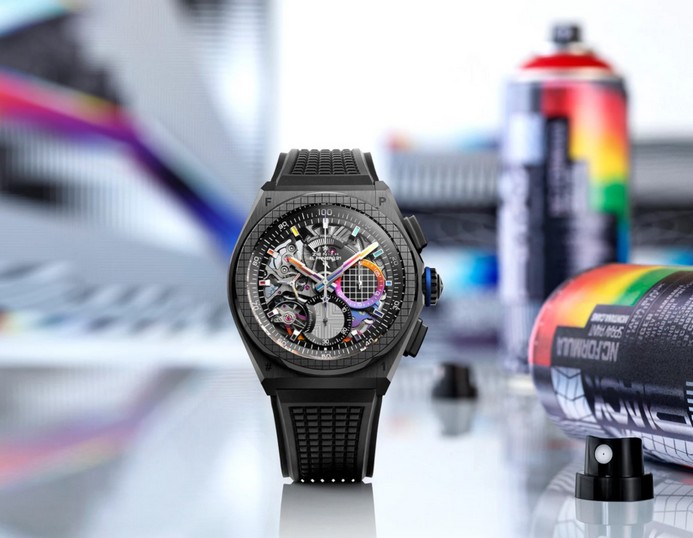 Argentinian-Spanish artist Felipe Pantone has reimagined Zenith’s most advanced chronograph to date, created an object that is at once a feat exceptional watchmaking prowess and a piece of wearable kinetic art – Defy 21 Felipe Panton. The limited edition DEFY 21 Felipe Pantone is a strikingly colourful creation that is all about playing with frequencies – visually and mechanically. The collaborative model expresses the visible spectrum concept of “a kinetic art work that can be worn, with time and light packed in one object,” according to Felipe Panton, in various parts of the watch.

The hour and minute hands in the center of the dial also have a special shape, which is intentionally distorted like a lightning bolt, inspired by Pantone’s work, and the rainbow color similar to the bridge of the movement is also applied here with PVD coating. The white and black moire effect that appears in Pantone’s work is reproduced by laser engraving and lacquer technology on the upper part of the bridge of the movement and a part of the dial. The dial indexes and counters are also gradation. The self-winding rotor has a black satin finish.

Specifically, using a technology that is rare in the world of watchmaking, the large parts (bridge) of the movement are given a rainbow-like color. This is achieved by a three-dimensional PVD coating of silicon particles, and each individual has a slightly different color, making it a unique product.

The case is also specially designed by Pantone, the bezel has a grid pattern, and the four corners are specially marked with the letters “FP # 1” which means “Felipe Pantone El Primero”. El Primero is the name of the movement manufactured by Zenith, meaning number one. Also unique is that the Zenith logo is placed on the windshield instead of the dial. In addition to the black rubber strap, a rainbow-colored strap that reflects light is also included.

The package is tailored like a hardcover book, and the cover is a miniature version of the specially crafted Felipe Pantone artwork. The case is made of black ceramic. Water resistant to 10 bar. The case diameter is 44 mm. The mechanical watch limited to 100 pieces is available in Japan for approximately 2.2 million yen ($20,190).